Cloud Strife lived his childhood in Nibelheim with one ambition flooding his mind: becoming a member of Shin-Ra's SOLDIER. When old enough, Cloud set out for Midgar to become a First Class SOLDIER. Before leaving, however, he made an important promise to Tifa: he would return to rescue her if her life was ever in peril. Cloud was accepted into First Class Soldier following the Wutai war. Cloud made an acquaintance of Sephiroth, the commander of the SOLDIERS, while under employment for Shin-Ra. An adamant bond and respect grew between the SOLDIERS over time. SOLDIER was soon assigned a task to investigate the Mako Reactor in Nibelheim, following the mysterious spawn of monsters in the town

“I know... no one lives in the slums because they want to. It's like this
train. It can't run anywhere except where its rails take it.” - Cloud

They discovered that the experiments lead by Hojo had been the source of the plague of fiends in town. Realizing Nibelheim was being annihilated around him, Cloud rushed to the Nibelheim Reactor where he found an injured Tifa, and fulfilled his earlier promise to her. There he discovered and entered the open JENOVA door to encounter Sephiroth, who was the cause of the destruction now bombarding Nibelheim, and JENOVA. Cloud attempted to stop Sephiroth, however, Cloud could not recall the outcome of that moment later on. Five years later, Cloud journeyed to Midgar to work for AVALANCE and made it his goal to, along with his determined companions, to stop Sephiroth and protect the world from his imminent wrath.

“What I have shown you is reality. What you remember, that is the illusion.” - Sephiroth

Cloud is seen as the typical cold-hearted main character of Final Fantasy VII; the stereotype of most Square Games, or should we say, one that expresses no lenience whatsoever. This is far from the truth. Cloud is a man who sacrifices most everything unconsciously. He is unfortunately caught between the man he is and the man he thinks he has to be in order to be seen as a person of value and a person who is accepted and struggling for affection among those dearest to him. Who is he? A blur to himself, and a man in need of an identity that is true. His devotion to those around him is typically overlooked because of his seemingly evasive nature. His awkwardly handled compassion acts as a shield, to protect him of his biggest fear - turning up as a failure. His once painful adolescence as an outcast and a human experiment is a reflection of his constant battle to survive his excessive, mind-altering confusion - a confusion more surreal and ominous than any character of Final Fantasy VII.

“I wasn't pursuing Sephiroth; I was being summoned by him.” - Cloud

Spoiler [Highlight to read]
Cloud’s past memories of him being a First Class SOLDIER had crumbled in his mind. At the Northern Crater, Sephiroth had revealed the truth about Cloud’s memories. Although his memories of him before he was a SOLDIER were true, Cloud was never the First Class SOLDIER, but only a Shin-Ra guard. It was a man named Zack who was the true First Class SOLDIER that befriended and challenged Sephiroth at the Nibelheim Reactor. Cloud traveled to the Nibelheim Investigation as one of the two guards that accompanied Sephiroth. Shameful and embarrassed about never making First Class SOLDIER, Cloud hid his face from Tifa under his Shin-Ra helmet. When Sephiroth had burned the town of Nibelheim, Cloud ran to the reactor to find Tifa. As he arrived he found both of them seriously injured by Sephiroth.

Cloud had run into the reactor, stabbing Sephiroth with Zack’s sword. Sephiroth struck back at Cloud, immensely wounding him. Cloud was unwilling to give up and threw Sephiroth into a Mako pit inside the Reactor.

When Sephiroth’s terror had ceased, Shin-Ra Company went to the Nibelheim Reactor to investigate the damage done by Sephiroth. Professor Hojo had found the bodies of Zack and Cloud and decided to use them for experimentation of the Jenova Project. For five years, Cloud and Zack were used as lab rats to Hojo in the Shin-Ra Mansion. The amount of Jenova and Mako injected into Cloud’s body brought him into a comatose. Zack had no reaction to the cells injected into his body and five years later he broke out of the Shin-Ra Mansion along with Cloud. Zack had escaped with Cloud who was still in a coma state, yet before they made it into Midgar, Zack was shut down. Cloud’s memories then joined with what Zack was, causing Cloud to believe he was Zack. Later on Cloud’s memories merged with Tifa’s thoughts, and Cloud believed he was the First Class SOLDIER who grew up in the town of Nibelheim.

Official Biography (From the official guide book): The main character of Final Fantasy VII. Originally a member of SOLDIER, he is now a mercenary who will take any job. After being hired by AVALANCHE, he gradually gets caught up in a massive struggle for the life of the planet. His enormous sword can cut almost anything in two.
Dissidia Final Fantasy Wallpaper 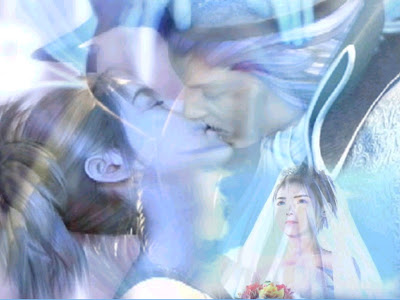